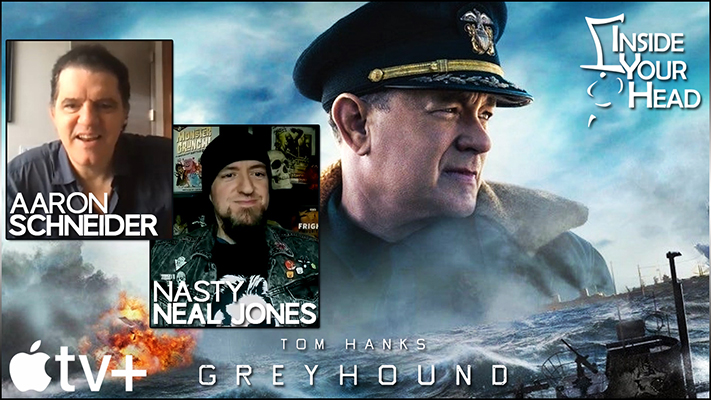 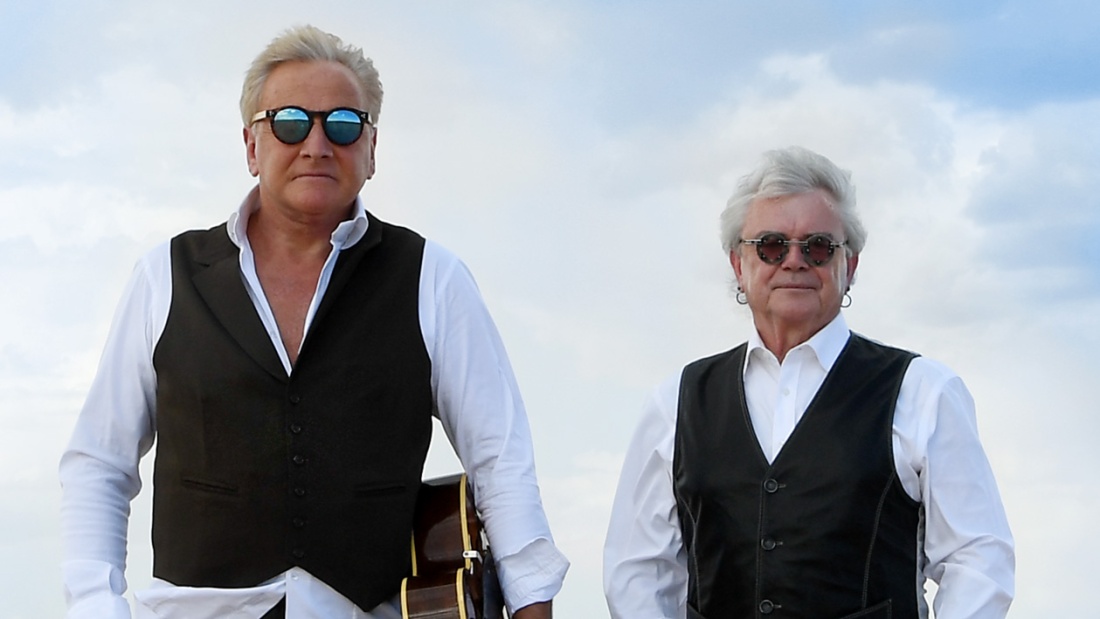 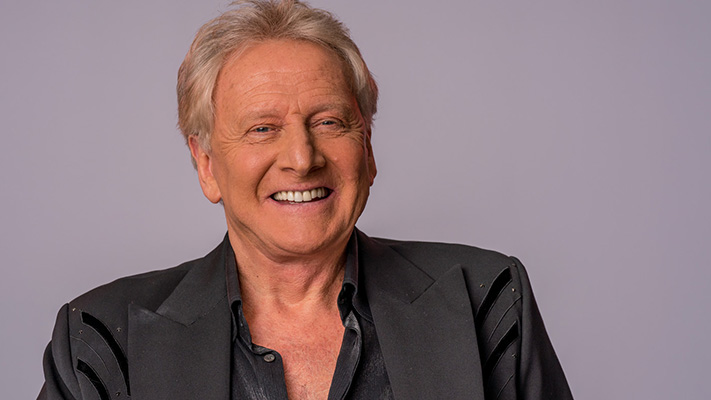 One can’t deny the well-meaning premise behind director Spencer T. Folmar’s opioid crisis drama SHOOTING HEROIN. It is clearly a topic that is under-exposed in the current cinematic zeitgeist, but the film’s lack of nuance undermines what might have been a story that could shine a light on this devastating epidemic.

The film follows a returning war hero, (played with admirable restraint and sensitivity by Alan Powell) who is dropped smack in the middle of an entirely different battle zone, one that takes the life of his beloved sister and risks destroying his entire community. He is compelled to take drastic action, with potentially devastating consequences. His performance is the one that keeps the film from falling into an overly melodramatic pit of pedestrian sermonics and vigilante action tropes.

The cast includes the always welcome presences of the awesome Sherilyn Fenn and Cathy Moriarty, but even their noble attempts to rein in their characters are to no avail. Fenn, in particular, is given a character that often risks drowning in over the top Mommy Dearest level histrionics. Unfortunately, it is these types of overcooked stock characterizations, along with the often intrusive musical scoring, that results in the film falling short of delivering its vital message.

But one can’t deny there is an admirable passion here, and the film’s elegant lensing from veteran cinematographer John Honore gives the film a slick, top notch look. However, for all of its importance, SHOOTING HEROIN comes off as well meaning, but often heavy-handed. 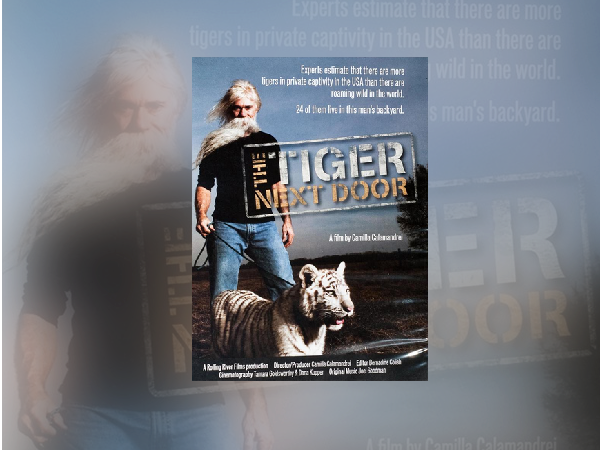 Long before Tiger King and Joe Exotic were on the minds and lips of Americans from coast to freaking coast, filmmaker Camilla Calamandrei set out to chronicle the inexplicably seamy underbelly of private tiger sanctuaries in her 2009 documentary The Tiger Next Door. Much like the unlikely sensation that Tiger King would eventually become (thanks in large part to the shelter-in-place malaise wrought by COVID-19) The Tiger Next Door features a bizarre antihero as the linchpin of its narrative, albeit one who is nowhere near as flashy — or as interesting, for that matter — as the aforementioned Exotic One. Tiger aficionado Dennis Hill, who ostensibly serves as the protagonist for The Tiger Next Door, takes center stage in Calamandrei’s project, which chronicles Hill’s efforts to hold on to his faltering tiger sanctuary, facing down legal maneuvers from the government and scrutiny from other animal enthusiasts. (Interestingly enough, Hill has his own claim to hating Tiger King villain Carole Baskin, who has accused Hill of threatening to kill her some years ago.)

Truth be told, while The Tiger Next Door is actually a decent documentary, it’s actually quite challenging to comment on the endeavor as a whole without lapsing into a critique of the life choices of the film’s dramatis personae, particularly with regard to Mr. Hill. Looking like an uncanny mash-up of Rip Van Winkle and the Marlboro Man, Hill has a backstory fit for the worst Randy Travis song you’ve never heard. Once living large as a construction magnate, he fell on hard times, losing everything including the love of his life. At the bottom of his pit of despair, he was convicted on federal drug charges and eventually found salvation in… rescuing tigers, of course.  Then again, was Dennis Hill actually rescuing the tigers or was he collecting them for his own enjoyment (and occasional financial benefit, allegedly), while housing them in deplorable conditions and neglecting the needs of these complicated and potentially dangerous creatures?

The answer to the latter question depends on who you ask, as a cavalcade of critics and supporters share their opinions on Hill’s efforts and aspirations. Hill’s admirers, for their part, put forth a healthy amount of American exceptionalism in their support of his private sanctuary, asserting that he has the right to stack and rack apex predators in dirty, ramshackle cages and potentially putting every man, woman, and child in the vicinity in danger because of, well… freedom, bro. And Hill himself seems empowered by both supporters and detractors, declining to take responsibility for every wrong turn in his life, from his years as a meth-slinger to the life-threatening health problems suffered by the big cats in his care. Then again, it’s probably much easier to be a bitter pariah than a trained zookeeper of a licensed veterinarian.

At least Dennis Hill has more freedom than you can shake a stick at. The tigers? Eh, not so much.

At the end of the day, it’s hard to say what exactly The Tiger Next Door aspires to be. At best, it is an eminently watchable documentary. At worst, it’s an episode of Hoarders on steroids, except that the main character hoards giant cats instead of old newspapers and aluminum cans. Either way, it’s an okay enough way to spend about an hour and a half.

Inside Your Head tips our cap to The Tiger Next Door, awarding it three out of five golden tophats.

Anita Pointer of “The Pointer Sisters” joined the show to talk about her new book “Fairytale : The Pointer Sisters’ Family Story”. Anita told stories about Sesame Street, The Carol Burnett Show, genres of music, being the first black females on The Grand Ole Opry,  entertaining the troops with Bob Hope during the Gulf War, the rise of MTV,  early days signing contracts and more!
www.anitapointer.com

Burt Ward “Robin” of the classic “Batman” series joined the show! We talked about the classic series, Adam West, Burgess Meredith, Julie Newmar, Vincent Price, “Crisis on Infinite Earth”, his star on the Hollywood Walk of Fame, the “2 Face” rumor with Clint Eastwood, the Batusi, Frank Gorshin & John Astin, Conan O’Brien and so much more including his dog food and dog rescuing! 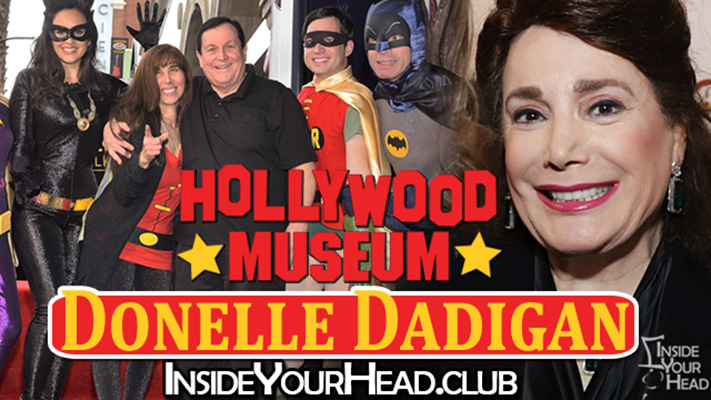 Donelle Dadigan joined us to talk about the history of The Hollywood Museum. 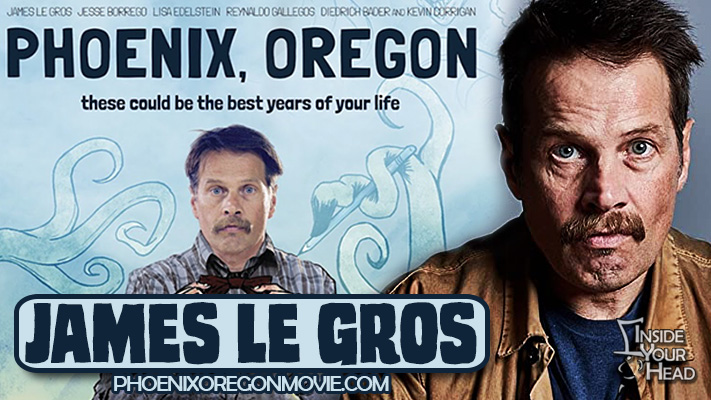 Please check out PhoenixOregonMovie.com for information on how to see the new film now at home!

Special LIVE Inside Your Head​ podcast tonight starting at 6:30E/3:30P with Donelle Dadigan the founder of The Hollywood Museum! Following Dadigan I will be joined by “The Boy Wonder” himself Burt Ward of the classic BATMAN TV SERIES​!

Live via Tune In Radio 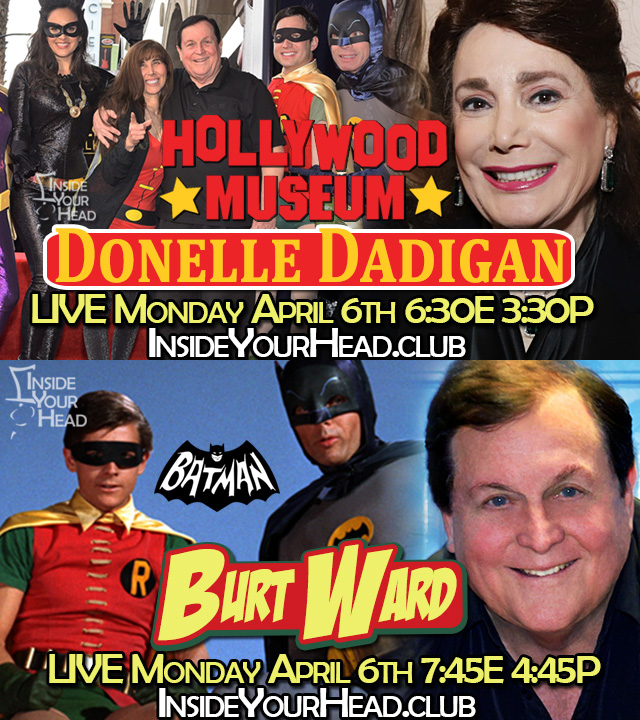