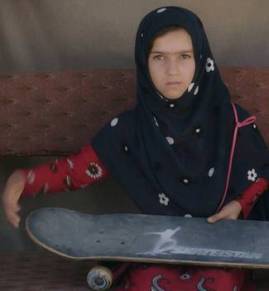 For the better part of the twenty-first century, Westerners – and perhaps much of the rest of the world – have come to regard Afghanistan as an unforgiving seedbed of misery and suffering. But long before the terror attacks of September 11 put the name of the Taliban on the minds and lips of people around the globe, the people of Afghanistan endured a lonely struggle under the yoke of Political Islam. Indeed, under the Taliban rule, women were subject to some of the most draconian repressions imaginable. Vestiges of this era remain in Afghanistan to the present day, necessitating unorthodox and innovative efforts to protect and nurture the young women and girls of a new generation. Learning to Skateboard in a Warzone (If You’re A Girl), a 2019 film by Director Carol Dysinger and Producer Elena Andreicheva, offers a candid look into one such endeavor, a unique program for girls known as Skateistan.

Established in 2007 by Australian skateboarder Oliver Percovich, Skateistan (which means “The Land of Skate”) provides a safe place for girls in Afghanistan’s capital city of Kabul to attend school and also to learn how to skateboard. In this program, skateboarding is used as both an incentive to foster classroom involvement and as a method of teaching the importance of determination and perseverance. Learning to Skateboard in a Warzone takes audiences inside the classroom to witness girls enjoying newfound forums for knowledge and self-expression and subsequently follows the same students into the large, indoor skate facility for their on-board lessons.

Students and their teachers also sit down with Dysinger and her crew for interviews, sharing their personal experiences of life before Skateistan, including tales of isolation and victimization. But it is optimism that ultimately prevails through their narratives, as women and girls candidly discuss the opportunities that the school has afforded them and their aspirations for the future. So determined are the women who run this endeavor that they evoke memories of the revered anti-Taliban resistance group The Revolutionary Association of the Women of Afghanistan (RAWA), who have shared their struggles in such books as With All Our Strength (2004) and Zoya’s Story (2002).

While the subject matter of Learning to Skateboard in a Warzone is compelling in and of itself, the content is complemented by outstanding cinematography and a simple yet poignant musical score.

Although the threats of terror and oppression loom large in the background of this film, Learning to Skateboard in a Warzone is ultimately a story of hope. As the courageous women and girls of Afghanistan continue to emerge from decades in the shadows, they will do so with newfound knowledge and determination thanks to the encouragement and support of programs like Skateistan.

Inside Your Head doffs our proverbial caps to Learning to Skateboard in a Warzone (If You’re A Girl), awarding this film five out of five golden tophats.